Complete History Of The Establishment Of Bank Indonesia 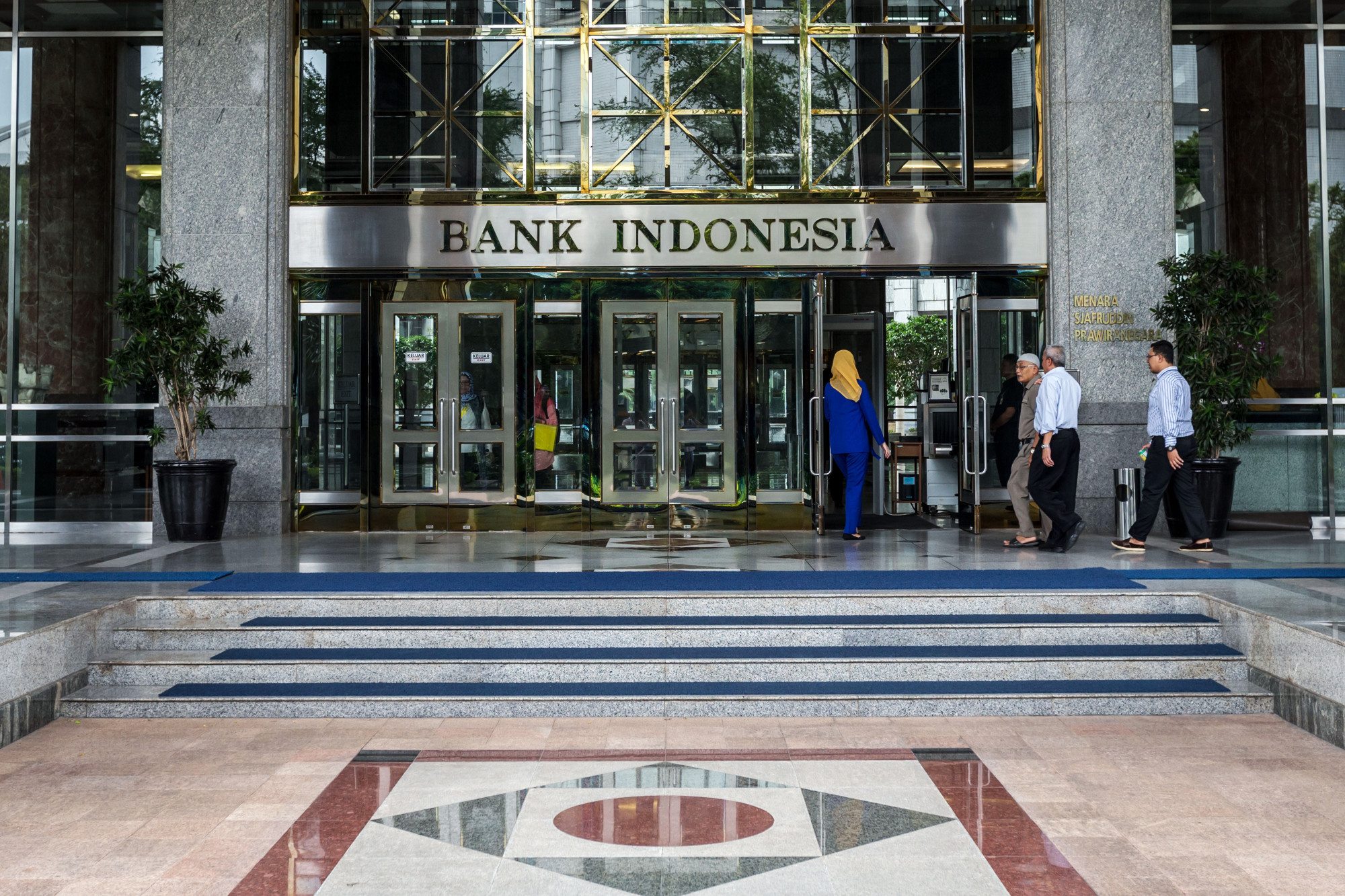 in the Year 1600
The arrival of Europeans to Southeast Asia on a mission to find spices. In the archipelago, there have been kingdoms that already have their own currency. In addition, foreign currencies such as Picis from China are also circulating, which dominate the circulation of money.​

In The Year 1603
​The VOC aimed to open trade in the archipelago as well as destroy Portuguese domination (but failed).

In The Year 1746
The first bank in the archipelago that was established to support trading activities in 1746 was Bank van Courant. This bank has a duty to provide loans with collateral for gold, silver, jewelry, and other valuables.
​In 1752, Bank van Courant was refined to become De Bank van Courant en Bank van Leening. This bank was tasked with providing loans to VOC employees so that they could place and circulate their money in this institution. This is done with the lure of interest in return​.​

In The Year 1830
To fill the state treasury because it was drained by the Java War, the Dutch imposed forced cultivation (cultuurstelsel) in the Dutch East Indies. Deviations from the implementation of the Cultivation System are contained in the novel Max Havelaar by Douwes Dekker which invites polemics among the public and politicians in the Netherlands. De Javasche Bank was used by the colonial government to support the financial policies of the Cultivation System. Between 1829-1870, DJB expanded its business by opening branch offices in several cities in the Dutch East Indies, including outside Java: Semarang (1829), Surabaya (1829), Padang (1864), Makassar (1864), Cirebon (1866) , Solo (1867), and Pasuruan (1867).​

In The Year 1870
The government issued the Agrarian Law (Agrarische Wet) which allowed the private sector to invest in the business sector in the Dutch East Indies. This prompted the revival of the plantation sector in the Dutch East Indies so that it became an important producer of international trade commodities in the world.
As a result of massive economic exploitation by the Dutch during the implementation of the Cultivation System, a movement known as the politics of reciprocation or better known as the Ethical Policy emerged in 1901.
In the banking sector, at the beginning of the 20th century, many credit banks emerged with the aim of encouraging the development of the people's economy.
Between 1870-1942, De Javasche Bank opened 15 branch offices in strategic cities in the Dutch East Indies, namely: Yogyakarta (1879), Pontianak (1906), Bengkalis (1907), Medan (1907), Banjarmasin (1907) , Tanjungbalai (1908), Tanjungpura (1908), Bandung (1909), Palembang (1909), Manado (1910), Malang (1916), Kutaraja (1918), Kediri (1923), Pematang Siantar (1923), Madiun (1928).​

In The Year 1942
​During the Japanese military administration, DJB was liquidated. DJB's duties as circulation bank in Indonesia were then replaced by Nanpo Kaihatsu Ginko (NKG).

In The Year 1942
In 1828, the Government of the Kingdom of the Netherlands gave octrooi or special rights to De Javasche Bank (DJB) to become a circulation bank. During this period, DJB had the authority to print and circulate guilders in the Dutch East Indies. Octrooi is periodically renewed every 10 years. By 1922, the Octrooi had been extended seven times. In 1922, the Dutch Government issued the law De Javasche Bank Wet.

In The Year 1945
After the Proclamation of Indonesian Independence, the Dutch tried to regain control of Indonesia through the Netherlands Indies Civil Administration (NICA). At this time, NICA re-established DJB to print and circulate NICA money. It aims to destabilize the Indonesian economy.
In accordance with the mandate written in the explanation of the 1945 Constitution, article 23, namely "In this regard, the position of Bank Indonesia which will issue and regulate the circulation of banknotes is determined by law", the Government of the Republic of Indonesia established a circulation bank, namely Bank Negara Indonesia (BNI).
As an effort to uphold economic sovereignty, BNI issues money under the name Oeang Republik Indonesia (ORI).
The existence of RI's BNI and NICA's DJB has led to the dualism of circulation banks in Indonesia and the emergence of a currency war. At this time, DJB money is known as "red money" and ORI is known as "white money".

Republic of the United States of Indonesia (RIS)

In The Year 1949
In 1949, the Round Table Conference (KMB) took place with one of the important points of agreement being the recognition of the sovereignty of the United States of Indonesia (RIS) by the Netherlands. The position of RIS is under the Kingdom of the Netherlands and the Republic of Indonesia is part of the RIS. In addition, KMB also established DJB as the circulation bank of the United States of Indonesia.
After the Republic of Indonesia decided to leave RIS, during the transition back to NKRI, DJB remained a circulation bank with share ownership by the Dutch.

In The Year 1953
In 1951, there was a strong urge to establish a central bank as a manifestation of the economic sovereignty of the Republic of Indonesia. Therefore, the Government decided to form a DJB Nationalization Committee. The nationalization process was carried out through the purchase of DJB shares by the Government of Indonesia, with the amount reaching 97%.​
The Government of the Republic of Indonesia on July 1, 1953 issued Law No. 11 of 1953 concerning the Principal of Bank Indonesia, which replaced DJB Wet of 1922. Since July 1, 1953, Bank Indonesia was officially established as the Central Bank of the Republic of Indonesia.​
Law No. 11 of 1953 was the first provision to regulate BI as the central bank. BI's task is not only as a circulation bank, but also as a commercial bank through lending. At this time, there is a Monetary Board (DM) in charge of setting monetary policy. DM is chaired by the Minister of Finance with members of the Governor of BI and the Minister of Trade. Furthermore, BI is tasked with implementing the monetary policy that has been determined by the DM.
Guided Economic Period
During the Guided Democracy, President Soekarno introduced the concept of Guided Economy. At this time, the Governor of BI was appointed as a member of the cabinet as Minister of Central Bank Affairs and the Monetary Board no longer functions. In the banking sector, there is the "Bank Berdjoang" doctrine in the form of unification of all state banks into a single bank under the name Bank Negara Indonesia (BNI), which was established through Presidential Decree No. 17 of 1965. During the implementation of "Bank Berdjoang", Bank Indonesia was changed to BNI Unit I, while other state-owned banks are divided into BNI Units II-V.

Bank Indonesia as development agent and holder of state treasury

In The Year 1968
In 1968, the Government of Indonesia issued Law no. 13 of 1968 concerning Bank Indonesia. This law reinstates BI's duties as the Central Bank of the Republic of Indonesia and terminates BI's status as BNI Unit I. One of the articles in this law also stipulates that BI no longer has the function of disbursing commercial credit, but acts as a development agent and holder of the state treasury.
Meanwhile, through Laws No. 21 and 22 of 1968, other banks that are members of the Sole Bank turned back into independent state banks.​

In The Year 1988
BI issued a policy package for banking deregulation, known as the October 27, 1988 Policy Package, better known as Pakto 88 or Pakto 27. This policy is intended to encourage the growth of the banking industry by facilitating licensing in the establishment of new banks.

In The Year 1997
The monetary crisis that occurred in Asia prompted BI to take policy steps to overcome the crisis, such as implementing a floating exchange rate policy for the exchange rate, closing troubled banks, and restructuring unhealthy banks.

In The Year 1999
With the enactment of Law No. 23 of 1999 concerning Bank Indonesia, Bank Indonesia was established as an independent Central Bank. This law stipulates the sole objective of BI, namely to achieve and maintain the stability of the Rupiah value, and to abolish its objective as an agent of development.
Since this period, BI has implemented a monetary policy regime with an inflation targeting framework. In the ITF framework, BI's credibility is judged by its ability to achieve the inflation target set by the Government.

Ratification of Bank Indonesia as an Independent Central Bank

In The Year 2004
The DPR passed Law No. 3 of 2004 concerning Amendments to Law No. 23 of 1999 concerning Bank Indonesia. This law contains an affirmation of the position of an independent central bank, refinement of the regulation of duties and authorities, and structuring of BI's supervisory function.​

Confirmation of Bank Indonesia as lender of the last resort

In The Year 2009
The House of Representatives passed Law No. 6 of 2009 concerning the Stipulation of Government Regulation in Lieu of Law No. 2 of 2008 concerning the Second Amendment to Law No. 23/1999 concerning Bank Indonesia into Law. This law clarifies and reinforces the role of BI in its function as lender of the last resort.

The function of banking regulation and supervision is transferred to OJK